Not sure where to start with this one today. Fifty years ago (yes…really!) the philosopher McCartney recorded for posterity a lyric along the lines of “Woke up – fell out of bed – dragged a comb across my head”; and that’s pretty much how the day begun. Dashing off to weigh-in at Weight Watchers confirmed the horror that Christmas feasting had laid upon my waist, however my Beloved and I then headed off to breakfast at a secluded cafe in the absolute middle of middle-class suburbia – Cafe Central at Rapid Creek.

I perhaps should cease the ‘average’ analogies right there. Yes, the shopfront is rather plain, and yes… the menu is pretty much what you would expect from a cafe whose reputation is built upon tried and true menu entries, and the dining areas make the best use out of everyday cafe decor… As the best have discovered: If it ain’t broke – why fix it?

The cafe is located at the end of the Rossiter Street shops in Rapid Creek. Remember the days when good town planning had a row of shops in the centre of a suburb that everyone could walk to within five minutes to get the basics – a litre of milk, a newspaper, a loaf of bread and some fruit and veg. The may have been a hairdresser, a milk bar, and a butcher also located in the row of shops. And generally all situated not far from a school or two, a sports field, and maybe a doctor with his home-based practice nearby as well.

That’s how I recall this particular row of shops 35 – 40 years ago when I was growing up in the neighbourhood. Then with consolidation and corporate takeovers and the big-boys getting bigger, the corner shops fizzled out. A fate that befell the Rossiter Street shops. Which is why a few years back when I saw this cafe establish itself as the ‘go to place’ for all walks of society, it absolutely amazed me. What were they doing when all else was failing? Well, this visit certainly gave me a good indication.

As I mentioned, the menu is what you would expect elsewhere. There’s no fancy trendy menu items; nothing named after the chef, the proprietor, or the cafe; nothing flown in from overseas specially for the menu; no particular breed of cattle or sheep mentioned; and no place names associated with the veg… Except one dish which could just well be their signature dish – the Drover’s Dream.

According to Cafe Central, drovers dream at breakfast time of two crumpets toasted golden and laid over with bacon, then drizzled with maple syrup and topped with rosella jam (also known as roselle elsewhere). You are quite unlikely to find this dish anywhere else – it may be the title of a song, book and/or movie elsewhere, but not here. I just had to try it for myself. 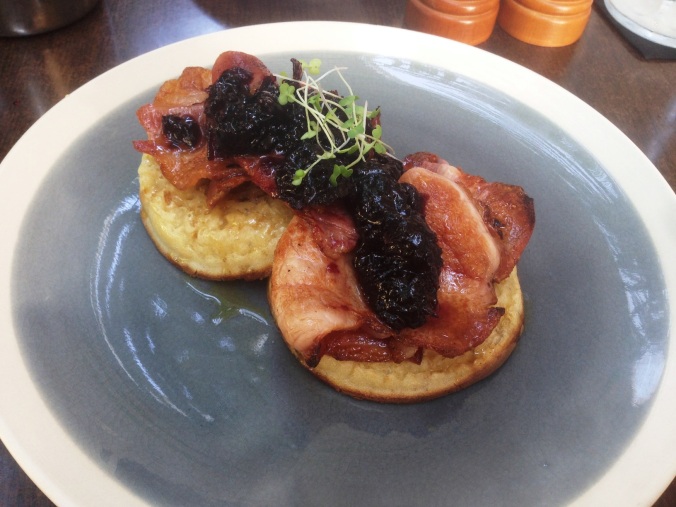 What can I say? I highly suspect that the crumpets were a bought-in element, but cooked perfectly. The short cut bacon (back/loin bacon) was ever so slightly crispy without being over-cooked, and a generous serve of jam was placed on top with a throw of micro-herbs for a burst of flavour and colour. The jam was just tart enough to offset the maple syrup, and a lovely saltiness from the bacon complimented the overall taste. The rosella ‘petal’ is naturally tart, and so I find that most shop-bought or home made rosella jams will often be overly sweet to compensate. I hate fighting nature and prefer my rosella jams to be rather tart, as this indeed was.

What more can I say? These were simple elements that were prepared and cooked with passion. My own experience with these elements tells me that if you take away your focus for the shortest time, they will burn and ruin – but here they were just right. The bacon could have been patted down a bit before serving, and the table knife was oddly inadequate for cutting both bacon and crumpet and a steak knife was requested. Other than that, the meal was a hit with me. Pork is a great vehicle for a range of sauces, and rosella jam is no exception. The dish is unique among other cafes, looks and tastes unique, and is further complemented by a mighty fine coffee, which – fortunately – Cafe Central also make.

A quick glance around showed me that there were young urban professionals, fitness junkies, mums and dads, and friends catching up with friends all visiting. The inside seating area was full, so we sat on the balcony. Being a dog-friendly cafe, there were dogs to either side of us impeccably well-behaved. Further beyond the balcony there were additional tables in the grassed area still vacant. Being a humid 33degC morning, it was understandable that the sunlit tables weren’t taken. At the end of the balcony tables were pulled together in a long row to accommodate 18-20 road cyclists all decked out in their strip and lock-in bike shoes…

The cafe features table service and generally such service was prompt and pleasant – even if the young waitstaff are a bit on the quiet side with their voices (I still have no idea what one young server was saying to me). Pricewise, the cafe is not expensive, and the quality of my meal certainly indicated value for money.

If the Drover’s Dream (and coffee!) is any indication of the rest of the menu, then I can understand why this cafe, nestled within a row of defunct shops, is such a hit. Can they / should they expand into the adjacent empty shops? It’s a thought…